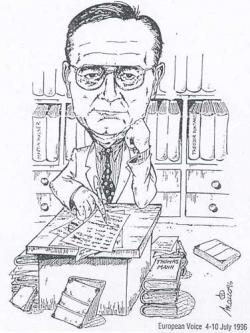 Klaus Hänsch belongs to a vanishing generation of German politicians whose thinking is shaped by memories of the war, a youthful passion for France and a deep commitment to the ideal of a united Europe.

As a child of seven, Hänsch survived the traumatic experience of fleeing from his native Silesia to western Germany, joining the millions of refugees seeking to escape the advancing Soviet army.

A train he was on with his mother stopped outside Dresden just hours before the city was destroyed. Like many of his generation, Hänsch grew up with the experience of having narrowly escaped death.

After 1945, Hänsch lived and attended school in Flensburg in Schleswig-Holstein, a sleepy provincial town on the border with Denmark.

When he reminisces, the European Parliament's president likes to describe how he used to go swimming in an estuary of the Baltic Sea, with the German-Danish border running through the water. Even then, he says, he experienced the frustrating absurdity of not being allowed to swim on the other side.

As a student, Hänsch - the first member of his family to go to university - read political science in Cologne, Berlin and Paris, in an early show of intellectual curiosity and resilience in a young man without family money, connections or a scholarship.

But while others of his generation were busy reshaping the world with radical thinking, alternative living and increasingly violent protest, Hänsch, ever the pragmatic realist, joined the Social Democrat Party (SPD).

He picked up his first political job as adviser to Heinz Kühn, Germany's cultural affairs representative under the Franco-German Treaty and Northrhine-Westfalia's head of government. Throughout the Seventies, he worked as adviser and press officer for some of that state's leading SPD politicians.

When the European Parliament became a directly-elected body in 1979, Hänsch was a natural candidate - and his 15 years of experience in the institution and several of its important committees served him well when he was elected to succeed the German Christian Democrat Egon Klepsch as president in July 1994.

But those who had expected that his long membership of the Parliament would make him turn a blind eye to its foibles soon had to think again.

With an earnestness and directness combining a Protestant work ethic with the best of Prussian tradition, Hänsch tried to woo, argue and bully sometimes reluctant MEPs into cutting down on their foreign trips and expenses, restructure debates to improve press coverage and generally make the operation of Parliament less expensive and more relevant.

"You should see him in full flow" says a close observer. "He just socks it to them. It may be blunt, but it works. There is never a doubt in anybody's mind about what he wants".

One of Hänsch's main aims in making the Parliament more efficient was to maximise its chances of improving its position at the Intergovernmental Conference on EU reform. But this would not be helped, he frequently warned, by making maximalist demands, as happened in the run-up to the Maastricht Treaty negotiations.

When he enters a room, the unobtrusive Hänsch hardly cuts an impressive figure. Asked to describe himself in a newspaper questionnaire, he came up with the answer "small, light, wearing glasses, grey, serious".

But his less-than-charismatic public persona is also the genuine reflection of a man who, while relishing his office, loves neither its trappings nor its ceremony. One of his first measures upon taking office was to cut down on the number of official lunches and dinners, a duty which he admits fills him with loathing.

Hänsch's most effective weapon, and one that became apparent even to his fellow pupils at school, is his passion and talent for words.

His insistence on a precise use of language and rigorous logical argument make him stand out from most fellow German politicians, whose mastery of rhetoric tends to be poor.

It also makes him the terror of his speech writers, who know that no draft is safe from endless rewriting.

Hänsch's final corrections of an important speech are often not completed until late the night before it is delivered, forcing his assistants to work through the night translating the document or preparing a press release.

But while working for him can mean gruelling hours, his aides clearly take pride in the intellectual prowess of a boss who, in the words of one adviser, "has never underperformed on any occasion".

A man with " a ferocious memory" and a keen love of literature, Hänsch can and does quote extensively from the German classics, while his knowledge of English and French - and the literature of both languages is good enough to enable him to surprise his entourage occasionally with little-known quotations.

Asked about his favourite authors, Hänsch names novelists such as Thomas Mann, Theodor Fontane and Martin Walser, master stylists with a keen eye for human frailties and the ironies of life.

And rather surprisingly for a German Social Democrat, he cites France's General de Gaulle as his favourite figure in history.

Hänsch's ecumenical approach to the political divide, and his blend of hard-headed pragmatism and European idealism, have won him the admiration of Germany's Chancellor Helmut Kohl, who hardly lets an occasion go by without stressing that he regards the Parliament's president as a "good man".

In a private exchange during the Florence summit, which aides said was typical of both, Kohl asked Hänsch if he had already received Germany's Bundesverdienstkreuz (Federal Cross of Merit), the German equivalent of the French Legion d'Honneur. Hänsch explained that he had always rejected suggestions that his name should be put forward because he was opposed to decorations being granted for no more than the proper fulfilling of professional obligations. The Chancellor won the argument when he pointed out that giving him the decoration would not only honour Hänsch the man, but also Hänsch the president of the European Parliament. Under those circumstances, said Hänsch, he could do nothing but accept.

His deep commitment to bringing the Parliament closer to the people has led Hänsch to make more than two dozen trips to the EU's provinces. At the request of an MEP, he will unveil a plaque, attend a discussion at a retired miners' club or give an interview to a local radio station.

"We sometimes wish he would be a little less accessible and not respond to so many requests", said one adviser.

Hänsch's extensive travelling throughout Europe is in stark contrast to his reluctance to go on long-distance trips, which he feels are mostly of little practical political value.

Since he has been in office, Hänsch has only left the continent once: for a trip to South Africa designed to reassure the fledgling democracy of the European Parliament's benevolence.

According to close observers, Hänsch genuinely enjoys his local trips. Frequently, he will ignore his tight schedule and get involved in some animated debate, making him late for subsequent meetings.

One of the most recent victims of Hänsch's occasional disregard for formality was the Uzbeki president, who was kept waiting to pay a courtesy visit to the European Parliament's president while Hänsch was discussing European affairs with a member of Tuscany's regional council. Any aggravation Islam Karimov might have felt, however, vanished when Hänsch engaged him in a lively discussion about the concerns of Uzbekistan.

Hänsch's notorious lack of punctuality is in sharp contrast to the impression of rigidity a first encounter can create, as is his fondness for topping off a long day's work with an easy-going dinner followed by a relaxed beer in a bar.

When he sheds the deep earnestness with which he goes about his duties, Hänsch comes across as an easy-going and witty conversationalist who is genuinely fond of a good meal, a good bottle of wine and a lively discussion.

His most difficult day in office came in July 1995, when French President Jacques Chirac visited the Parliament at the height of the crisis over French nuclear testing.

Hänsch presided over what was possibly the stormiest session in the Parliament's history, agonising over whether he should adjourn it or not. Eventually, he let things run their course, fearing that interruption would mean it would never be resumed.

While his rejection of visionary politics and his respect for reality have led him to reject attempts to pursue the creation of a European federal state, Hänsch's commitment to Europe has clearly withstood the frustrations of Union politics.

When asked in the newspaper questionnaire who or what he would have liked to have been, he answered: "Zeus as a bull, because of Europe."